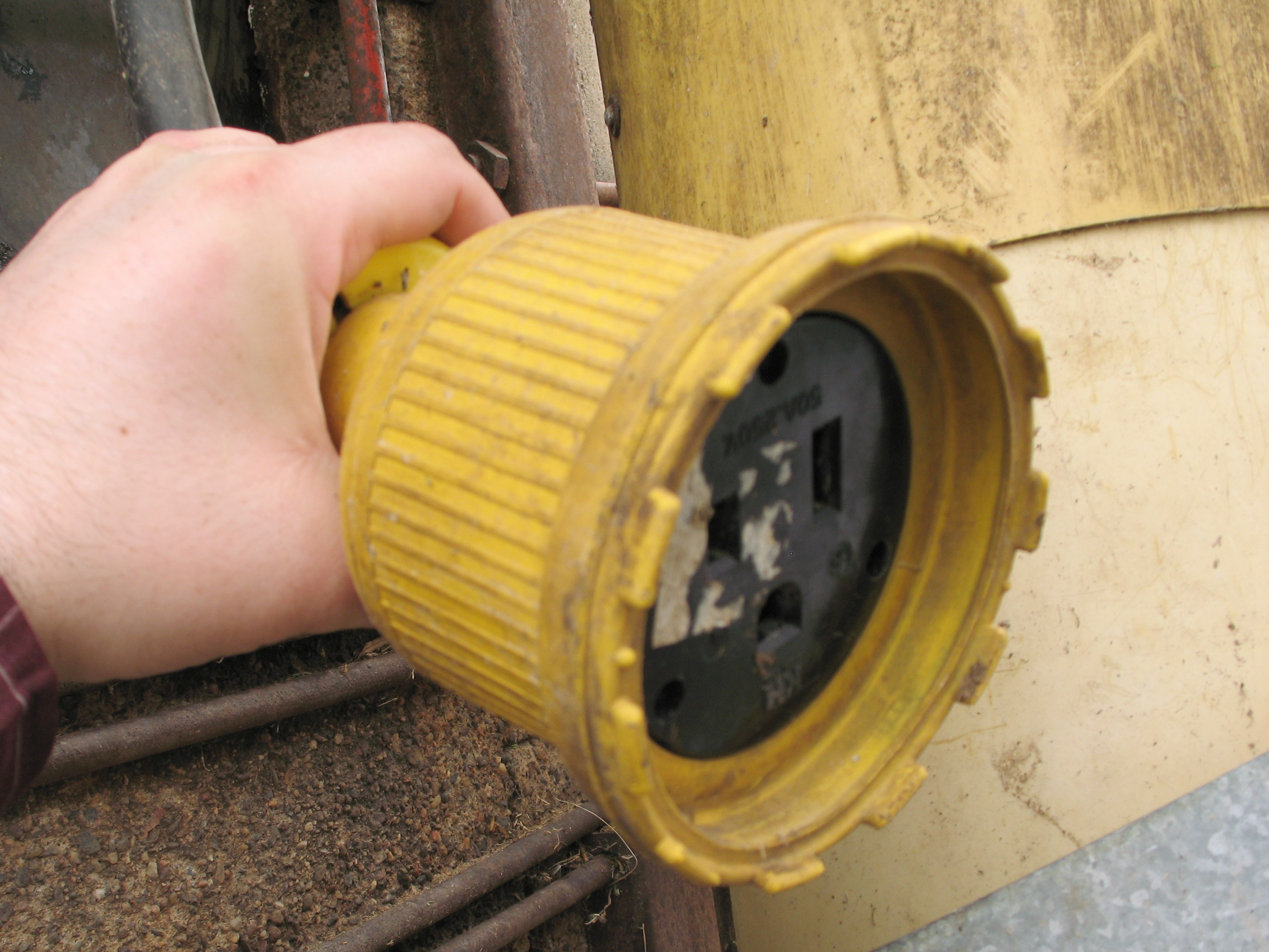 OK, bear with us for a minute. Even though the receptacle found in your motorhome is rated at 120 volts AC, the 50-amp shorepower is actually a 120/240-volt AC, four-wire service (Figure 1). The acronym AC stands for “Alternating Current,” which means the voltage is constantly changing from 0 to 120 volts positive and back down to 0 volts, before going to negative 120 volts and then back up to 0 volts. This happens 60 times a second in a process commonly referred to as 120/240-volt AC 60 Hz (hertz), as shown in Figure 2.

The electricity that feeds the 120-volt AC receptacle in the motorhome comes from the 120/240-volt AC breaker panel. This panel is supplied with 240 volts AC, which comes from two 120-volt AC legs that are 180 degrees out of phase. This means that when Leg 1 of the 120 volts AC is going from 0 to 120 volts positive (Figure 2), Leg 2 of the 120 volts AC is going from 0 to 120 volts negative (Figure 3).To get 240 volts AC to power the larger appliances like a clothes dryer or the aftermarket CheapHeat electric-element furnace upgrade, rather than going from one hot leg to neutral (120-volt AC), power is taken from the two opposing hot legs, and since they are 180 degrees out of phase, the end result is 240 volts AC (Figure 4). Now since the neutral wire (white) isn’t used in the 240-volt AC configuration, the waveform’s reference is from the red to black wires rather than red to white or black to white wires, which now generates the waveform as shown in Figure 5. This means that owners looking for high-capacity clothes dryers can upgrade to units powered by 240 volts AC, something that is offered in a number of high-end motorhomes.Got all that? Well, now let’s review the four-wire 50-amp shorepower cord. It has four 6-gauge wires rated at 50 amps each, meaning the cord has two 50-amp legs at 120 volts AC (hot to neutral) for a total of 100 amps at 120 volts AC or one circuit of 240 volts AC at 50 amps (Leg 1 hot to Leg 2 hot), or a combination of the two.But wait! If we have 120 volts AC at 50 amps on the red to white wires and 120 volts AC at 50 amps on the black to white wires, wouldn’t that be 120 volts AC at 100 amps on the white wire since there is only one white wire? Well, that’s because the two hot legs are 180 degrees out of phase. When Leg 1 electrons are moving toward positive 120 volts AC, the Leg 2 electrons are moving toward negative 120 volts AC. When correctly wired, the neutral leg will see no electron flow — and that’s why it’s called the Neutral Leg, and there is no overload.

This adapter was subjected to a heavy load that produced high heat and melted the plastic. For safety, and to ward off any loss of power, this 30-to-15 amp adapter needs to be replaced.

If the #RV park pedestal is wired incorrectly, and the two legs are not out of phase, you will have 100 amps applied to a white wire that is only rated for 50 amps. In that scenario you have both Leg 1 and 2 electrons moving toward 120 volts AC positive and negative at the same time (Figure 6), which means you have double the electron flow (current) going through the white wire when it’s only rated for half that load. The end result is an overloaded wire that will overheat and possibly cause a fire.

It’s common to find 50-amp electrical service in motorhomes these days, a requirement that’s needed to power the expanding use of convenience appliances and energy-thirsty accessories. Most owners unknowingly feel pretty confident that if they plug into 50-amp service, they can run all their systems without restrictions. But that’s not always the case, and what you see is not necessarily what you get. Understanding the complexities and limitations — yes, limitations — of 50-amp service will help prevent overloading and eliminate disappointments when it comes to taking advantage of fully equipped motorhomes.